Most of us tend to operate in an “out of sight out of mind” mentality when it comes to sewage – if the toilet flushes, we are happy. Of course, the stuff that goes down the drain must go somewhere and especially if you live near a lake, that somewhere may end up not being “out of sight” to you or your neighbors. If your septic system is well designed and well maintained it can protect the health of you, you’re neighbors and our lake for several decades. On the other hand, if your system is in failure, untreated sewage may be making its way to the lake with its pathogenic (disease causing) organisms and fertilizing nutrients.

Understanding how your septic system is supposed to work and how to maintain it, can help in both recognizing failure and avoiding it.

I recently did a bit of septic surfing (on the internet, of course) and found some interesting information that might be helpful to you in understanding and maintaining your current septic system or in upgrading or replacing your system. I’ll summarize briefly and give you some URL addresses so you too can hop on your board, hold your nose, and enjoy a few hours of septic surfing!

How Does The System Work?

Waste from your drains flows by gravity down slightly sloping pipes to the septic tank. Clear but odorous liquid then flows from the tank through sloping pipes to a distribution box that evenly distributes the liquid to level and holey (but nonreligious) pipes that deliver the liquid to the soil in shallow soil filled trenches called the leach field.

But what happens along the way?

The tank is sized to hold sewage from your house for a minimum of one day. It has deflecting plates or baffles at both the inlet and outlet that keeps sewage from directly traveling across the top of the tank to the outlet. The purpose of the tank is to separate solid particles in the sewage that will either sink or float from the liquid. Floating particles form a floating layer called “scum” and the stuff that sinks forms a layer on the tank bottom called “sludge”. Bacterial decomposition in the tank occurs via the anaerobic bacteria (organisms that thrive in environments without air) that live in your digestive tract and are thus in your waste. These organisms are slow decomposers, especially at temperatures well below your body temperature. Generally a household will produce solid particles faster than the bacteria will break them down so the scum and sludge layers will grow in thickness. When the clear space between theses layers gets to be less than about a foot in a 1000 gal tank, particles will begin to flush out of the tank and these solids in the outlet liquid (effluent) will ruin the leach field. So, it is necessary to pump out the septic tank before the clear space between scum and sludge layers gets too small.

The effluent from a well maintained septic tank will look like clear water but it won’t smell like it and it will be loaded with bacteria and other organisms (from the occupants of your house), dissolved organic waste, and the fertilizing nutrients phosphorous and nitrogen. The purpose of the leach field is to distribute the liquid to soil that is between 1 and 2 ft below the surface of your yard. This distribution must be over a sufficiently large area so the soil particles will adsorb (means collect on the particle surface) the liquid without flooding it. This is important since the treatment of the adsorbed liquid is performed by aerobic bacteria (organisms that thrive in air) that live in the soil. Aerobic bacteria decompose organic waste much more rapidly than anaerobic bacteria would at the same temperature. The combination of the aerobic bacterial decomposition and the soil adsorption is remarkably effective at removing most of the offensive stuff in the septic tank effluent. Research has shown that appropriate soil types in a well designed system keep pathogenic bacteria and nutrients within a few feet of the leach field trenches and can continue to do so for decades. It is worth noting, however, that soil type has a great deal to do with the longevity of the system and that ongoing research indicates that some viruses are much more mobile in soil than bacteria. 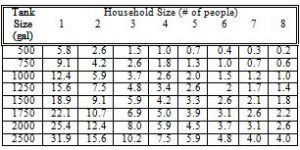 Research done in Nova Scotia in 2002 shows that the figures in the above table are quite conservative. A study of 40 private septic systems found that pumping frequencies of 2 to 3 times that shown in the table produced adequate space between scum and sludge layers. Thus, the table numbers should be a good guide line for an inspection of a tank where scum and sludge layers are measured and pumping could proceed if deemed necessary.

Incidentally, research has shown that resting of seasonal systems is very beneficial to both tank and leach field. The time without water input gives bacteria time to reduce sludge volumes in the tank and bio mat build-up on the soil in the leach field. This may explain why a seasonal system has worked perfectly well for years and yet fails when it is converted to year-round use.

Is Your Septic System in Failure?

It may or may not be easy to recognize a failed system. A backed-up toilet may indicate a plugged leach field but it could also be a flushed toothbrush. If all of your drains are running slowly and snaking the inlet line to your septic tank does not solve the problem, it is likely your leach field soil is at least partially plugged or saturated with water.

If your leach field is sufficiently downhill of your house, your drains might work perfectly well but the system could still be in failure. In this case you may notice wet muddy soil or standing water in the vicinity of your leach field accompanied by a smell of sewage or long green wet grass even during dry periods

Unfortunately, a system, with inappropriate soil types or inadequate depth to ground water below the leach field, may be failing but there may be no obvious signs. For example, with course soils or alkaline soils high in limestone, phosphorous is not retained well by the soil and in a few years can move considerable distances from the leach field. By contrast, the best soils may retain phosphorous within a few feet of the leach field for up to 100 years. Also, ground water may rise near the level of the leach field during high water conditions and pollute the water table. Codes generally require that the bottom of the leach field trenches be some minimum distance above high ground water, often 4 to 6 feet. Only a dug test trench and a soil analysis can detect these modes of failure.

You should definitely replace your system if it is in obvious failure and you should be suspicious and watchful if you are using a seasonal system as a year-round system. When you replace your leach field, you should also replace your tank if it is steel, if it is sized incorrectly or if it has damage such as missing or broken baffles.

New York State has relatively lax standards for individual household systems. These standards are enforced by the NYS Health Department and are detailed in a booklet entitled: Appendix 75-A Wastewater Standards – Individual Household Systems (last updated in 1990.) The booklet is available at the Saranac Lake Health Department office. Local codes may be stricter, so you should check with your code enforcement officer. New York still only requires percolation tests while many states now require a soil analysis to size a system.

If at all, avoid installing a new system that uses seepage pits for your leach field; even though New York State allows their use under certain conditions (see the above mentioned booklet.) Seepage pits, particularly the pre-cast units, tend to be too deep. Often, they are more than 4 ft deep and this presents several problems. The great depth makes for poor aeration in the crushed stone around the pit so it will be difficult for aerobic bacteria to thrive. Also, the greater depth will put the application area closer to ground water and increase the likelihood of water table pollution. Shallow trench systems are superior to seepage pits under most circumstances.

There is an interesting new development in septic systems. It is now possible to replace the traditional crushed stone in leach fields with 3 ft wide or wider plastic vaults or chambers that are placed in the bottom of the trench before back filling. Studies show that they are more effective at aeration and distribution than the traditional crushed stone. Gravity fed traditional leach fields are known to poorly distribute the sewage to the soil – most of the liquid flows out the holes at the near end of the pipe and the far end gets nearly nothing. Vault systems help this problem, and when combined with pumped pressure distribution systems, the distribution is excellent. Some states allow as much as a 40 % reduction in trench length when certain vaults are used.

This Program is focused on the Lake’s largest septic systems, those with over 1,000 gal/day discharge. Our Lake Manager works directly with these Camps and the DEC to insure that their systems are in compliance with New York State Laws.