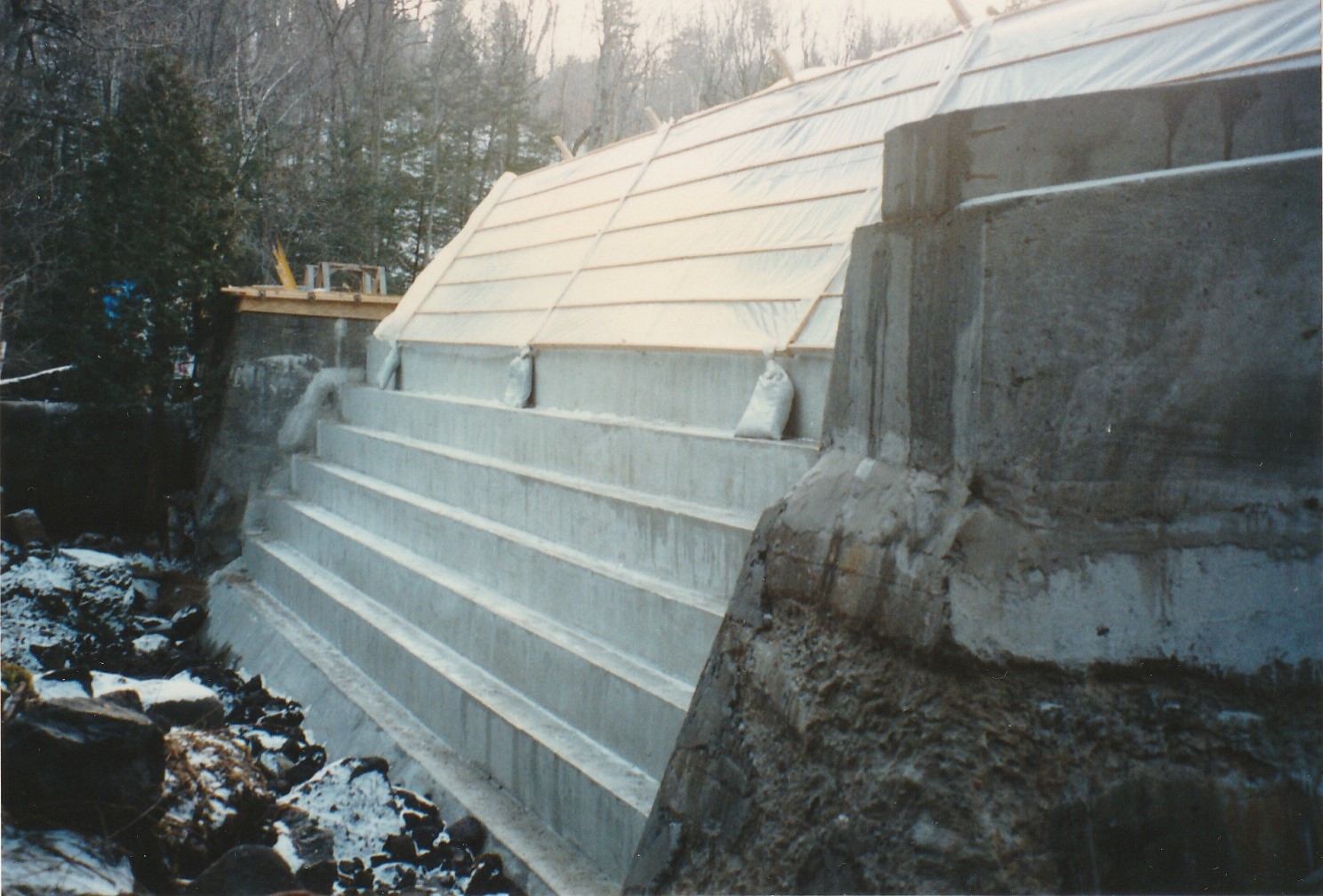 Reconstruction of the almost 100 year old Bartlett Carry Dam began in the fall of 1993 and completed in March of 1994. Work was preceded by several years of permitting and design that at times seemed unending.

Before construction could begin, permit approvals had to be obtained from the Department of Environmental Conservation, the U.S. Army Corps of Engineers, the Town of Harrietstown and the Adirondack Park Agency. Once the necessary permits were obtained, access to the dam had to be created since the Foundation acquired only the actual footprint of the dam itself, with easements and right-of-ways.

Access to the southern side of the dam was improved by opening up an old logging road. Access to the north side of the dam was obtained by temporarily widening a path to the Bartlett Carry Club Beach. Great care was taken to insure that the access areas could be restored as closely as possible to its pre-existing condition once construction was completed.

The dam was repaired in two stages. In late fall, a portable coffer dam was placed in front of the northern half of the dam, and the area was dewatered. Logs and debris were then removed from the upstream and downstream sides of the dam. Upon inspection, interior damage to the dam was found to be more extensive than realized and would have caused a failure within three to five years.

In late November, concrete was pumped into forms built around the old dam. The project was officially completed in March of 1994. The portable coffer dam was removed, and water flowed over the new spillway on December 20, 1993.

The coffer dams were moved to the southern side, and the process repeated.

Carl Hathaway, local caretaker, guide and one of the founding members of the Upper Saranac Foundation, was the point man and day to day overseer of the project, without whose guidance, expertise and wisdom, the project could not have been completed so successfully.

Restored, the Bartlett Carry Dam stands as a powerful testament to what a community of people, both committed and generous, can achieve. Completion ensures that Upper Saranac Lake remains accessible and navigable for the foreseeable future. No less important, the dam maintains a natural water level, which protects lakeside wetlands and other natural habitats for fish and wildlife.

Without the support of the shore owners who funded efforts to repair the dam, none of this would be possible.