Surveying for invasives by air

The Upper Saranac Foundation (USF) has been evaluating the use of small unmanned aerial systems, better known as drones, for aquatic invasive species (AIS) detection and mapping.

Multiple drones were used under a variety of weather conditions and varying flight elevations to assess the benefits and shortcomings of the use of drones in observing AIS. Observation from the drone itself could be seen in live-time with the use of goggles.

“It was as if the observer was flying in the drone,” Middleton noted.

Simultaneously, hundreds of photos were being taken throughout pre-established grid searches. The photos were uploaded and consolidated into a single photo montage. On a computer, suspicious underwater objects could be zoomed in on for closer identification.

Consistent with visual surface spotting from a boat, weather conditions and water clarity played the largest factor as to the drone’s effectiveness. Early mornings, calm winds, and good water clarity provided the most efficient way to spot AIS.

Drone flights that were too low to the water (30 feet or lower) affected visibility due to prop-wash disturbing the water. Too high (75 feet or above), there was limited visibility due to distance from the water surface. While there are distinct advantages for drone surveillance when evaluating terrestrial plants, aquatic invasive detection and mapping with a drone seems to have its limitations. 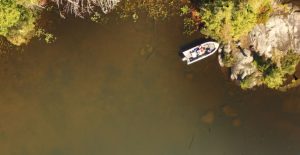 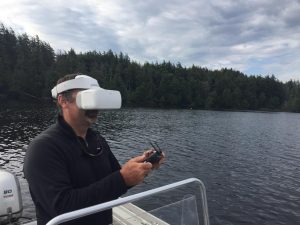 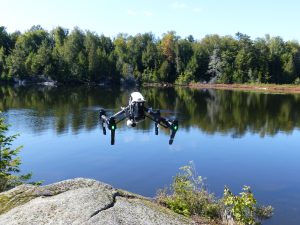