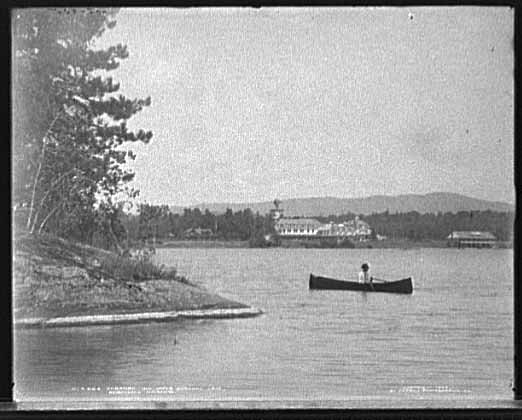 In the mid 1980s, issues facing Upper Saranac Lake began to expand beyond normal summer concerns over water safety, fishing reports and increased use of the Lake. The issues became more focused and defined by those things that, if not addressed, would have adverse long-term environmental impacts.

As we gathered necessary information and scientific data, it became clear that we needed to raise significant funds to preserve the quality of our Lake and its water. Deeply concerned members of the Upper Saranac Lake Association (USLA) undertook the establishment of the Upper Saranac Foundation (USF) in 1989 for just that purpose.

Action was urgent because of the failed dam at Bartlett Carry. Fundraising began at the time that an IRS application for a 501 (c) (3) was filed. The Foundation’s by-laws specified a five-person Board of Directors, which would be accountable to its donors and the IRS requirements. Since its inception, the Foundation has raised $3 million, averaging nearly $250,000 per year over the last few years.

Since 1989, the Foundation has provided funds for rebuilding the Bartlett Carry Dam, hiring a Lake Manager, acquiring Tommy’s Rock, launching the Lake Steward Program and undertaking various legal actions involving the local fish hatchery. The Foundation monitors septic systems, environmental breeches by developers, property owners, the Fish Hatchery, and the Bartlett Carry Dam to ensure compliance with all laws and regulations. In addition to being responsible for the scientific data involved with the Lake’s water quality (sample collection, testing and analysis), the Foundation funds and manages the issues relating to Eurasian Milfoil (remediation, educating the community and annual control efforts). All the Foundation’s efforts are focused on maintaining the water quality of Upper Saranac Lake.

In 2004 it was determined that Upper Saranac Lake was significantly infested with Eurasian Water Milfoil (EWM). The Foundation expanded its Board to 15 members, rewrote its by-laws and re-evaluated its goals, priorities, and objectives. It developed and launched the most comprehensive EWM control project in the history of the Adirondack Park. One and a half million dollars was raised from the Lake community for a three-year EWM control project for Upper Saranac Lake and its environs. The successful, intensive hand-harvesting program reduced infestation to manageable levels. However, EWM can never be eradicated. An ongoing Milfoil control program is necessary. Each summer, divers map and hand harvest Milfoil to limit re-infestation. This project continues to consume the majority of the Foundation’s funds and management time. Budgeted goals have been achieved (or exceeded) every year.